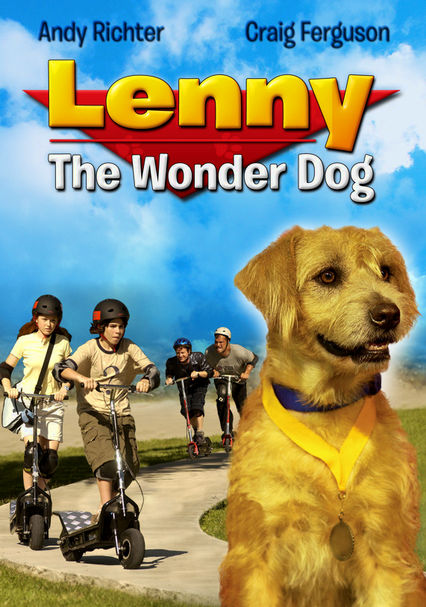 2004 NR 1h 24m DVD
On his way home from school, seventh grader Zach Dylan meets a stray dog and decides to take him in, only to learn that the cute canine has a very special gift: Thanks to a special microchip implant, the dog can talk!

Parents need to know that in Lenny the Wonder Dog the villains are clownish bumblers, the threats all prove harmless, and the action is meant to be funny rather than suspenseful. Characters chase, fall, disappear, and reappear, without injury or consequence. The silly plot's references to missing children and kidnappings, which might be upsetting to kids, are never resolved. With the exception of two well-meaning oddballs, the authority figures and parents are portrayed as inept, delusional, and foolish. There are a few insults ("moron," "loser"), and some other marginal language.

The 12-year-old hero has a crush on a slightly older girl. They share a chaste kiss in silhouette.

Lots of slapstick chases, falls, running into walls, etc. One teen is pulled into a car and briefly taken hostage. A dog bites a villain in the crotch. The outrageously mean, manipulative leader of an evil corporation screams a lot, intimidates, and sneers, though he's not really scary.

Good ultimately triumphs, though the movie's quality lessens the impact of the message. A heroic young boy is able to defeat an evil corporation and its power-hungry leader -- the film stretches this outcome to propose that the future of our world is in the hands of its children.