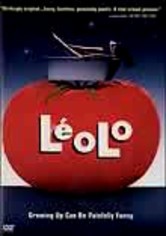 1992 NR 1h 47m DVD
An unusually fertile imagination is at once the salvation and downfall of Léolo (Maxime Collin), a young Montreal boy who retreats into a rich fantasy world in order to cope with the chaos of his daily existence and his highly dysfunctional family. Over time, the boy sinks further into his mental creation, ultimately eschewing reality -- and sanity -- in director Jean-Claude Lauzon's hypnotic, visually arresting film.