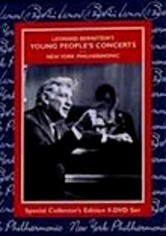 1996 NR 0h 55m DVD
In many ways, there'd be no New York City without composer Leonard Bernstein -- at least not the romanticized, sepia-toned town he wrote about in his songs -- which makes this homage to his talent so fitting. Filmed in the Big Apple locales celebrated in his immortal music -- including Times Square and Central Park -- this 1997 documentary commemorates Bernstein and his legacy. Among the featured performers are Mandy Patinkin and Audra McDonald.