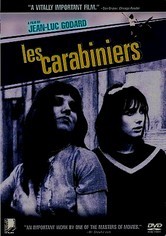 1963 NR 1h 20m DVD
Director Jean-Luc Godard's surreal, anti-imperialist film follows two moronic peasants (Marino Masé and Albert Juross) who join the king's army as mercenaries. During their tours of duty, they send postcards to their wives detailing their conquests -- including military targets such as the Statue of Liberty, the Eiffel Tower and Egypt's pyramids. Returning home, the duo learns a peace treaty has been signed and that they're considered traitors.