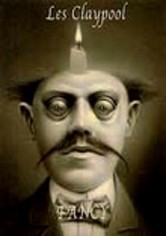 2007 NR 1h 0m DVD
Maverick rock bassist and vocalist Les Claypool joins his longtime associates Skerik on sax; Mike Dillon on vibes, marimba and percussion; Cake's Paulo Baldi on drums; and multi-instrumentalist Gabby La La in a series of shows from a 2006 summer tour featuring songs from the "Of Whales and Woe" album. Shot by a small band of devoted audience members over the course of several concerts, the film presents a true fan's perspective.