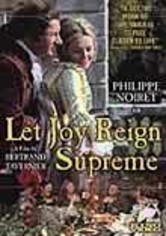 1974 NR 1h 54m DVD
Director Bertrand Tavernier takes a look at the 18th century reign of Philippe d'Orléans, the French regent who juggled his lust for debauchery with his political responsibilities. His appetites are witnessed by the ambitious Abbé Dubois (Jean Rochefort), an archbishop who humors him with the hope that someday his own thirst for power will be rewarded. All that decadence backfires, however, as citizens give into their disappointment and rage.