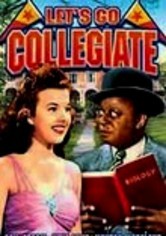 1941 NR 1h 2m DVD
Hoping to gain favor with pretty sorority sisters, fraternity brothers Jeff (Mantan Moreland) and his pesky pal Frankie (Frankie Darro) promise to bring rowing phenom Bob Terry to the girls' next dance. But when Bob is unexpectedly drafted, the comic duo must hire an impersonator to cover the blunder -- until they realize that he happens to be a wanted criminal. Also starring Gale Storm, this madcap musical comedy will have you in stitches.