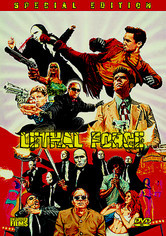 2001 NR 1h 10m DVD
A hit man must betray his best friend and fellow assassin in order to save his kidnapped son in this over-the-top satire. Spoofing everything from martial arts flicks and 1970s cop shows to fast-paced blockbusters, Lethal Force traces the events that occur after Jack (Frank Prather) finds his wife murdered and his son missing. A wheelchair-bound mob boss (Andrew Hewitt) promises to return the boy -- but only if Jack gives up his buddy.