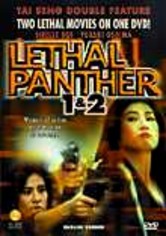 1990 NR 2h 57m DVD
Yôko Miyamoto and Maria Jo star as rival assassins in Lethal Panther 1, and Yukari Ôshima and Sharon Kwok play a pair of ace detectives hot on the heels of a notorious mob boss in Lethal Panther 2. In the first feature, double-crossing mob lieutenant Albert Wong (Lawrence Ng) employs the two women to take out his crime lord uncle. Then, an Interpol agent and a Chinese cop team up to track down a murderous gangster.