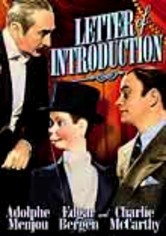 1938 NR 1h 40m DVD
The Mannerings are a celebrated theatrical family, but every clan has a black sheep; for them, that role is filled by John (Adolphe Menjou). When a daughter (Kay Leeds) he never knew he had appears on the scene bitten by the acting bug, John's bursting with pride, so much so that he goes along with her plans to seek fame on her own, without the Mannering name. Soon, however, tongues start wagging about the nature of their relationship.