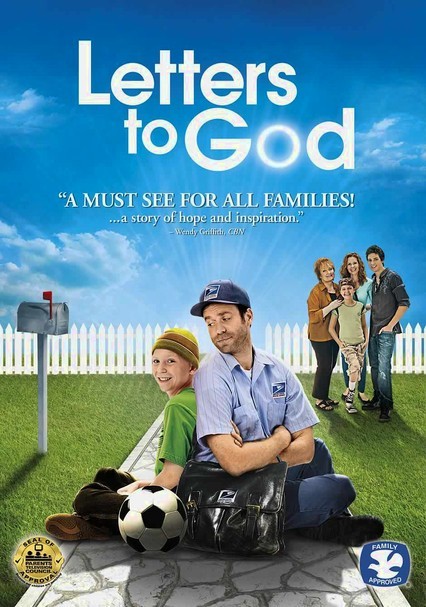 2010 PG 1h 53m DVD
Faith and hope are the twin engines that power this uplifting, bittersweet tale based on the true story of Tyler Doherty (Tanner Maguire), an 8-year-old boy who battles brain cancer and turns to God as his own private pen pal. Tyler writes and mails his missives daily, and his steadfast undertaking not only moves his family and friends, but it also alters the life of despairing postman, Brady (Jeffrey Johnson), who opens the boy's letters.

Parents need to know that this sweet, tear-jerking drama deals with a dying boy who considers it his personal mission to spread his Christian beliefs to family, friends, and even strangers like his mail carrier. As with most faith-based films, families that aren't Christians may feel uncomfortable with the overt Evangelism highlighted in the movie, but if you don't mind a religiously- themed plot, then it's not a concern. What may be of concern is the fact that the child protagonist is dying and eventually passes away. But because of his strong faith in God and his afterlife in heaven, he is not afraid to die, and his death is portrayed gently and lovingly. There is no profanity, sexuality, or product placements, but there is some mention of alcoholism (specifically drinking and driving), the affects of divorce on a single parent, and a couple of brief scenes in which adults get quite upset and yell and/or trash their belongings. Overall, the message is to find faith even in the face of personal tragedy.

The mail carrier and Tyler's mom flirt with each other and give each other longing looks.

No violence per se, but there are potentially disturbing scenes of a sick boy in a hospital bed or about to die. In one scene an upset man throws and kicks things around in his room, and in another scene a mother rages about having a dying son.

Tyler's faith is the ultimate message of this movie, which is the driving force of the story. His relationship with Brady, his postman, grows into something quite spiritual. Brady is basically "discipled" by Tyler, who considers it his greatest mission to share God's Good News with others. The consequences of drinking and driving are shown through the character of Brady, whose past alcohol abuse leads to divorce and losing custody of his son.

Brady discusses his past alcohol abuse and in one scene stares at a bottle of liquor. In flashbacks it's shown that he was in a DUI accident with his own son in the car.