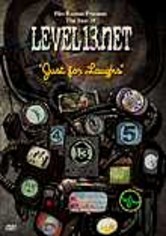 2002 NR 0h 45m DVD
Presented by Film Roman, producer of "The Simpsons" and "King of the Hill," Level 13.Net was born from a desire to explore animated short content and bring the best animated films to a wide audience. A compilation of some of the funniest independently produced animation from around the world, these original films (some of which have won prestigious awards) delve into unique environments where we're greeted by many absurd and comical characters.