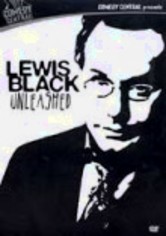 2002 TV-MA 1h 56m DVD
America's so-called "foremost commentator on everything," Lewis Black, lets loose his furious brand of comedy on everything from politics to pop culture in this collection of some of his best stand-up moments. Also includes never-before-screened segments of Lewis dropping in on both the Republican and Democratic National Conventions for Comedy Central, as well as bits from his first-ever special for the network and his "Tax Day" show.