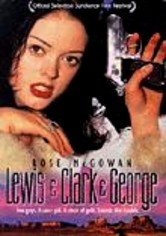 1997 R 1h 30m DVD
Escaped convicts Lewis (Salvator Xuereb) and Clark (Dan Gunther) set out to find a dead prisoner's hidden gold mine, but the two argue and separate. On his own, Clark meets George (Rose McGowan), who has stolen her boyfriend's drug money and seduces Clark when she hears about the gold. Before long, Clark and George run into Lewis, and the trio locates a secret map to the mine, unaware that George's angry beau (Brian Taylor) is hot on their heels.