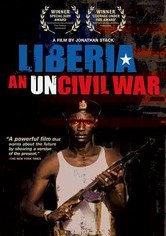 2004 NR 1h 42m DVD
Filmmaker Jonathan Stack provides a fearless account of the Liberian civil war in 2003, chronicling the showdown between the corrupt regime of President Charles Taylor and the Liberians United for Reconciliation and Democracy. Meanwhile, tens of thousands of civilians pray for intervention by the United States, which has become newly preoccupied by the Iraq War. Stack's unflinching film is an unforgettable portrait of a country in crisis.