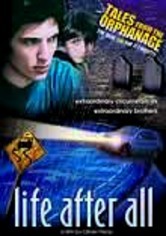 2003 NR 1h 30m DVD
In this affecting French drama, 18-year-old Vincent (Mathieu Tribes) takes on his new role as a surrogate parent to younger brother Lucien (Maxime Monsimier) -- after their parents are killed in a car crash -- while also seeking comfort and support from his girlfriend, Jessica (Clemence Poesy). In the meantime, 11-year-old Lucien retreats more and more into his own imaginary world where his parents still exist.