Life's Story 2: The Reason for the Journey 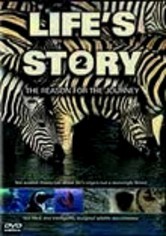 Life's Story 2: The Reason for the Journey

2006 NR 1h 40m DVD
This visual and scientific exploration of the natural world probes the behavior and instincts of wild animals from locations all around the globe -- from the savannahs of South Africa to the islands of Malta. Narrated by Nick Jackson of BBC National Radio, this breathtaking documentary investigates the relationship between different species, the evolutionary paths of specific animals and the nature of instinct and intelligence.