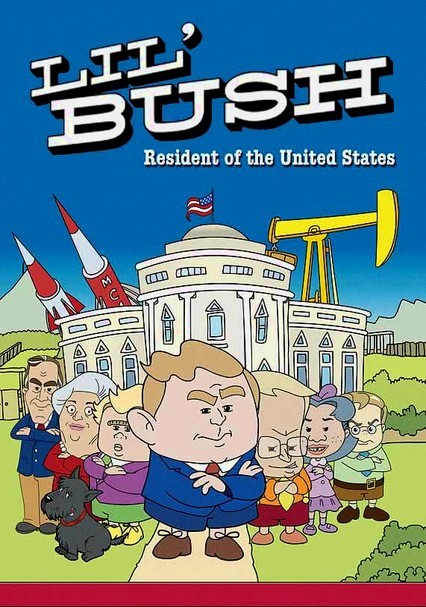 Lil' Bush and his posse of playmates -- Lil' Condi, Lil' Rummy and Lil' Cheney -- get into all sorts of playground high jinks in this satirical Comedy Channel animated series. The gang's adventures include a panty raid on an al-Qaida training camp, a feud with new school bully, Lil' Kim Jong-il, a scheme to ruin Lil' Al Gore's Lil' Live Earth Concert, a special friendship with Lil' Tony Blair and more. Iggy Pop provides the voice of Lil' Rummy.

Parents need to know that, like South Park, this animated political satire -- which is full of crude humor, sexual situations, and some cartoon violence -- is funny, but it definitely isn't meant for kids. What can you expect? Try Lil' Cheney tearing the heads off birds and sucking the blood from their throats, or former First Lady Barbara Bush appearing in sexy lingerie, spouting sexual innuendoes, and having sex with Lil' Cheney. Scenes set in Iraq include the young Bush and his pals wielding automatic weapons and killing people (though the cartoon blood in mostly reserved for animals, not humans). The political jokes are very sharp and don't pull any punches.

Barbara Bush appears in sexy lingerie and has off-screen sex with the child Lil' Cheney. He ends up entirely inside of her, necessitating an abortion. The elementary-school-aged Bush and friends have kissing contests. Lil' Condi and Lil' Hillary share an intimate kiss.

Scenes set in Iraq depict violence, including Lil' Cheney shooting automatic weapon, ruthlessly killing people and animals (only the latter are shown bloody). Cheney often tears the heads off birds and sucks the blood out of their throats. Lil' Jeb accidentally kills an Iraqi child. Lots of cartoon violence between Lil' Bush and Lil' Jeb.

All of the behavior shown is bad, but it's also clearly satire -- even though it points out real political scandals and errors.