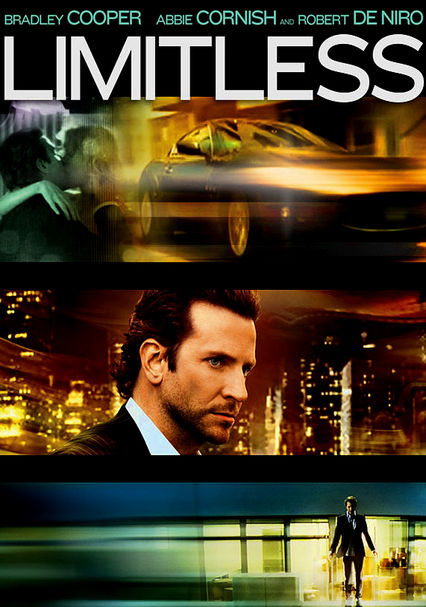 2011 PG-13 1h 45m Blu-ray / DVD
With his writing career dragging and his girlfriend casting him off, Eddie Morra finds his life turning around after he takes a drug that provides astonishing mental focus -- but its deadly side effects threaten his future.

Parents need to know that this sci-fi thriller based on a novel by Alan Glynn stars The Hangover's Bradley Cooper as a man who becomes addicted to a (fictional) drug that enhances users' mental powers, using it to further his own power and wealth. He becomes involved with gangsters and loan sharks, which leads to plenty of violence, including shooting, stabbing, and blood. He also sleeps with many women, and there's language (including one "f--k" and a few "s--t"s) and frequent drinking. Although the movie is rated PG-13, the message -- that drugs can help you overcome problems related to confidence and motivation -- and the lack of consequences for most of the main character's drug-fueled decisions and actions make Limitless a very iffy choice for teens.

The main character sleeps with many women during the course of the story, sometimes while he's in a relationship with his girlfriend. Viewers see kissing, fondling, and suggestions of sex.

Violence increasingly enters the main character's life as a result of the drug. He deals with gangsters and loan sharks, and there's some shooting and stabbing, dead bodies, and lots of blood (including one particularly gruesome moment in which the main character drinks blood). He makes a suicide attempt but backs off. In one scene, a man is blinded with a hypodermic needle. In another scene, a good character fights off a bad one by picking up a little girl wearing ice skates, flinging her feet in the villain's face, and using the blades on her feet to cut his face open.

The main character becomes addicted to a drug that enhances his mental powers and makes him capable of solving any problem (and thus overcoming his lack of confidence and motivation). While on the drug, he accomplishes many things, but most of them are self-serving and based on greed and lust. He engages in destructive behavior with few or no consequences. At one point, his girlfriend argues that he hasn't actually accomplished anything on his own. The ending doesn't solve this problem.

Drugs are the main issue here -- NZT is fictitious, but it drives the movie's entire plot. The main character is clearly physically addicted to the pills and gets to the point at which he could die if he stopped taking them. The movie shows the excitement of the high as well as the horror of the crash, the sickness, the side-effects, etc. The movie even has different lighting schemes for the two states: bright and colorful for the high, and gray and drab for the crash. In addition to NZT, there's plenty of drinking.