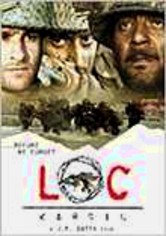 2003 NR 2 discs
This film dramatizes events that occurred as the hostility between India and Pakistan over Kashmir came to a head in 1999, when more than 1,000 men crossed the "Line of Control" that separates the two locations. Taliban and Pakistani soldiers took over the area, blocking the main road that linked the regions. Standing their ground, Indian soldiers slowly drove them away, but not without losing more than 400 of their own men first.