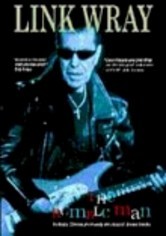 2003 NR 1h 11m DVD
This retrospective documentary charts the life and career of electric guitar trailblazer Link Wray, whose invention of the power chord helped pave the way for future fret men such as Pete Townshend, Jimi Hendrix and Jimmy Page. Featuring an in-depth interview with Wray and copious footage from his 1996 British tour, the video includes performances of classic tunes such as "Rumble," "Rawhide" and "King Creole."