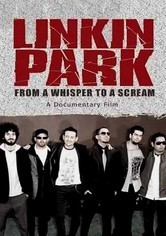 2008 NR 1h 2m DVD
This documentary offers an insider's look at the runaway success of California rap-rock band Linkin Park, featuring in-depth interviews with founding members and longtime friends Rob Bourdon, Brad Delson and Mike Shinoda. The program also includes rare images and photographs along with additional interviews with journalists and colleagues of the band, creating a detailed portrait of the group that helped put the nu metal genre on the map.