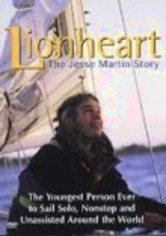 1999 NR 1h 10m DVD
At a mere 17 years old--a time when most teenagers are applying to college and planning the prom--Jesse Martin set out to become the youngest person ever to circumnavigate the globe. Armed with his trusty 34-foot yacht, Lionheart, Martin faced storms, waves, loneliness, and other turbulence during his amazing journey. Lionheart is a diary-like record of Martin's difficult expedition which candidly captures him alone on his boat.