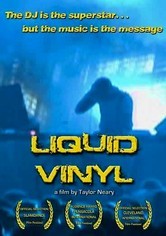 2008 NR 1h 24m DVD
In the late 1980s, DJs brought dance music from the underground to the masses. In Taylor Neary's exhilarating documentary, you'll meet the mix masters who became stars in their own right as they morphed existing tracks into dance-floor masterpieces. New Jersey sound pioneer Tony Humphries, British DJ-turned-actor Goldie and "Three Deck Wizard" Carl Cox are among the interviewees who recall how the new musical style made them superstars.