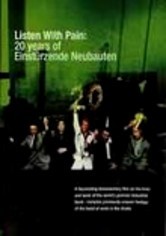 2006 NR 1h 35m DVD
German avant-garde band Einsturzende Neubauten celebrates two decades together with this absorbing documentary charting their career highs and lows. Best known for their experimental sound and homemade instruments, Einsturzende Neubauten is one of the most inventive groups to emerge from Deutschland. The film includes behind-the-scenes footage and interviews with the band members, who discuss their musical influences and philosophies.