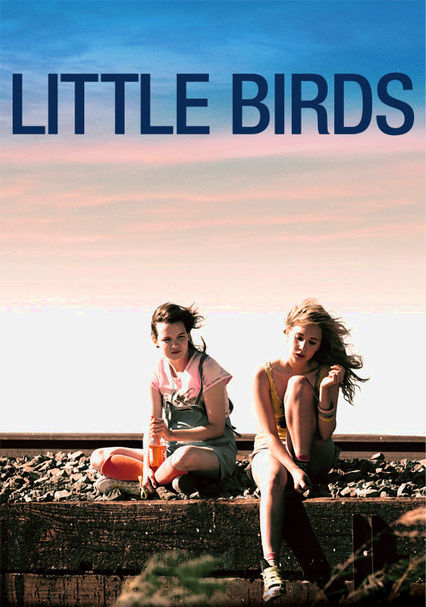 2011 R 1h 34m DVD
Lily and Alison struggle to overcome the boredom of being teenagers in a small town. When they meet three street kids and follow them to Los Angeles, the girls learn just how far they're willing to go to find their freedom and remain friends.

Parents need to know that Little Birds, an affecting drama about two teenage girls seeking a respite from their bleak lives, is both moving and disturbing. They steal a truck and run away to Los Angeles, where they get involved with a violent skateboard gang; one is excited, while the other is apprehensive and wants to go home, creating a conflict that threatens their bond. There's non-stop swearing ("f--k," "s--t," and much more) and some realistic, graphic beatings that leave the victims bloody and unconscious, as well as a horrific sexual assault. Teens drink, smoke cigarettes, and take drugs; there are also a couple of scenes of one of the girls topless.

A woman brings a guy home from a bar. A teen girl is shown topless while bathing and later takes off her top again while kissing a boy. They discuss going further but are interrupted. The girl pretends to be an underage prostitute to attract men who are then assaulted by her gang-member boyfriend.

Several brutal assaults, including a gang member beating a man's head with a skateboard, another man who's mugged at gunpoint, and a violent brawl that leaves several people bloody and unconscious. An underage teen girl is nearly raped by a violent adult; she's saved when he's shot by another teen girl. Other teens threaten each other, including pushing, shoving, using intimidating language, and spitting. The violence is very realistic, and people genuinely seen dazed and injured afterward.

Near-constant swearing from all of the teen characters and several of the adults, including "f--k," "s--t," "bitch," "ass," "t-tties," "c--t," and lots of other expletives. Profanity punctuates the conversation in nearly every scene.

Friendship is the key theme of the movie. Lily and Alison have been best friends all their lives, but their bond is tested when they run away together and Lily becomes involved with a gang member. They say hurtful things to each other and seem to be moving in different directions, but when one of them really needs help, the other is there for her.

A man who's being mugged complains when he's asked to hand over his BlackBerry phone.

Teens frequently drink beer and get drunk while hanging out. Some of them smoke cigarettes. Adults get drunk in the midafternoon, and hang out in bars drinking and smoking. Some characters smoke pot and talk about being high. One character sometimes deals drugs.