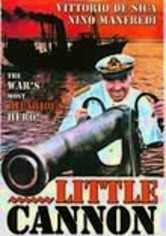 1958 NR 1h 24m DVD
A World War II freighter captain is astonished when he seemingly defeats a large enemy vessel with his small steamer and its little cannon in this riotous Italian adventure-comedy directed by Wolfgang Staudte. Emboldened by his apparent victory, the skipper sets out with his crew and his undersized boat on a quest across the high seas hunting for enemy submarines. Vittorio De Sica and Nino Manfredi head the cast.