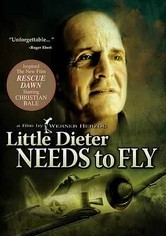 1998 NR 1h 14m DVD
Werner Herzog directs this fascinating, emotional documentary about the life of Dieter Dengler, a naval pilot in the Vietnam War who -- during one of his first missions -- was shot down over Laos and taken captive. Beginning with his hardscrabble youth in postwar Germany, the film explores Dengler's incredible tale of survival, from the torture he endured at the hands of the Vietcong to the daring escape he mounted with his fellow prisoners.