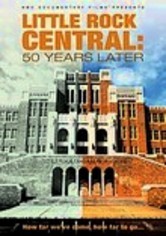 2007 NR 1h 40m DVD
Filmmakers Brent and Craig Renaud return to Little Rock's Central High 50 years after the Arkansas school became a flash point during desegregation and the Civil Rights movement. But has there been true change? Present-day students and faculty, community leaders and one of the original Little Rock Nine show how much further we need to go since 1957, when an angry mob attempted to block nine courageous black students from entering the school.