Live by the Fist 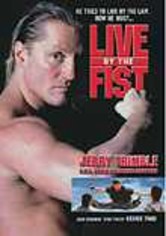 Live by the Fist

1993 R 1h 18m DVD
A Navy S.E.A.L. (Jerry Trimble) is jailed for a murder he didn't commit. While behind bars, he discovers that inmates at the prison are judged on their fighting and killing skills (talk about maximum security!). But when Trimble refuses to join this dangerous underworld, he becomes marked for death by the prison warlord. Now, he has to fight just to survive. George Takei (Star Trek's "Sulu") co-stars.