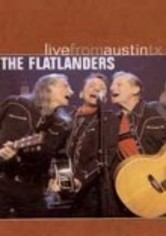 2004 NR 1h 0m DVD
It's the award-winning "Austin City Limits" television show -- remixed, remastered and reedited from the full original concerts that were adapted for the half-hour TV show. Robert Earl Keen is the featured performer on this video that contains never-before-seen concert footage. Tracks include "Dreadful Selfish Crime," "Blow You Away," "Shades of Gray," "Goin' to Town," "Buckin'," "I Still Miss Someone" and many more.