Live from Austin, Texas: The Flatlanders 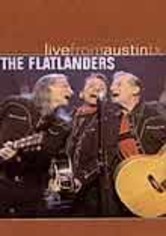 Live from Austin, Texas: The Flatlanders

2004 NR 1h 0m DVD
It's the award-winning "Austin City Limits" television show -- remixed, remastered and reedited from the full original concerts that were adapted for the half-hour TV show. The Flatlanders are the featured performers on this video that contains never-before-seen concert footage. Tracks include "I Had My Hopes Up High," "She's Gone Away," "Down in the Light of the Mellow Moon," "I Thought the Wreck Was Over," "Wavin' My Heart Goodbye" and more.