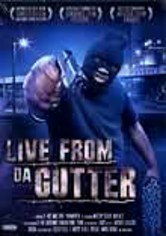 2004 NR 1h 10m DVD
Banned from major theaters across the country for its graphic content but acclaimed for its realism, this gritty documentary looks at life in the gutters of the West Coast rap scene from street brawls and riots to pit fights in the projects. Featuring an all-star lineup of rappers -- including Yukmouth, C-Bo, Bad Azz, Celly Cel, E-40, Mitchy Slick, T-Nutty and the late Mac Dre -- the film boasts music that rivals the action.