Live from the Laugh Factory: Vol. 1 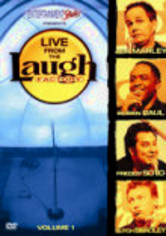 Live from the Laugh Factory: Vol. 1

2005 NR 1h 30m DVD
Since opening on the Sunset Strip as a tiny storefront in 1979, the Laugh Factory has played host to some of the world's most hilarious people, including Jerry Seinfeld, Robin Williams, Richard Pryor, Dave Chappelle, Jim Carey and Adam Sandler. This collection of performances shows off the stand-up chops of a quartet of seasoned comics: Ruben Paul, Freddy Soto, Butch Bradley and Bob Marley (no, not that one).