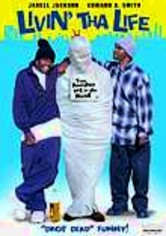 2003 R 1h 25m DVD
Weekend at Bernie's meets Friday in this wacky comedy when Jamal and Peanut cruise around Compton in their fly automobile. But they're accompanied by an unusual passenger in the backseat … one who's wrapped up in a sheet and isn't moving! It's just another messed-up day in the 'hood, albeit with tons of hilarious characters.