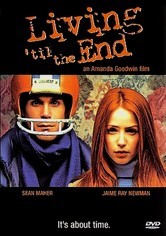 2005 NR 1h 27m DVD
A visit to a psychic leaves Jack (Sean Maher) with two pieces of lousy news: His girlfriend has been cheating on him and he will die on his next birthday. Taking the latter prediction to heart, Jack waits the year out in his apartment turned bunker, until a vivacious but terminally ill woman (Jaime Ray Newman) changes his perspective. The two lives combine with poignant results in this romantic drama from debut director Amanda Goodwin.