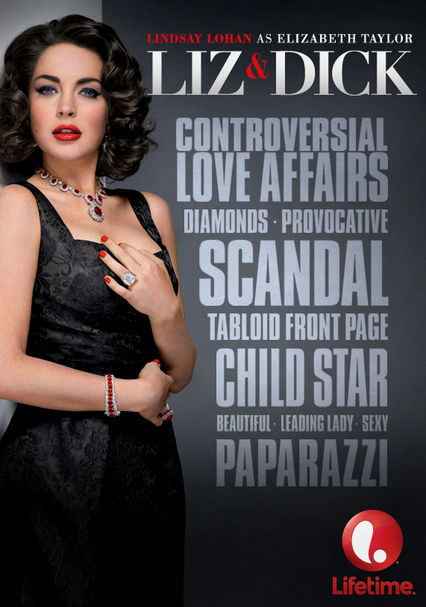 2012 NR 1h 30m DVD
This made-for-television biopic follows the legendary romance of Elizabeth "Liz" Taylor and Richard "Dick" Burton through two marriages -- and two divorces -- beginning with their fateful meeting on the 1960 set of Cleopatra.

Parents need to know that Liz & Dick is a biopic about two characters who weren't necessarily nice people: Richard Burton and Elizabeth Taylor, who were each married to other people when they got together. They take pleasure in cheating and seem to care little about those they hurt, including spouses and children. Both are massive drinkers and smokers and are seldom seen without a cigarette onscreen. Taylor is also a pill popper, often seen taking "medication" and once swallowing a bottle of pills and chasing it with vodka in a suicide attempt. There is emotional cruelty galore as the pair insult each other constantly and fight violently, with screams and shoves. No real nudity, but Burton and Taylor are frequently shown in bed with implied nakedness. Both Burton and Taylor end up rather unhappily, which parents may want to use as an object lesson: See what happens when you drink, cheat, and brawl? Teens might be attracted to the movie thanks to Lindsay Lohan's role.

Lots of making out in bed and cheating couples, with implied sex. At one point, Lohan-as-Taylor is completely nude and lying on her stomach, while Bowler-as-Burton uses her rear end as a pillow, concealing it.

The only possible positive message one can draw from all the brawling and drinking is that love endures -- until it doesn't. Otherwise, this is a depressingly realistic look at how humans squander their own happiness.

Both Taylor and Burton were heavy smokers, and this is reflected onscreen, with both characters frequently smoking, lighting cigarettes, or stubbing them out in ashtrays. Both are heavy drinkers as well, and sometimes act foolishly when drinking. Taylor pops pills, and at one point attempts suicide with pills and vodka.