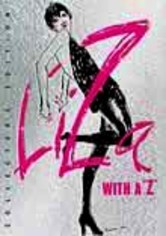 1972 NR 1h 0m DVD
A 26-year-old Liza Minnelli bursts onto the stage in this 1972 television concert directed and choreographed by the legendary Bob Fosse. Minnelli shines in unforgettable versions of the songs that made her a star, such as "Yes," "Ring Them Bells," "My Mammy," "Bye, Bye Blackbird" and "You've Let Yourself Go." She also belts out a medley of songs from Cabaret, including "Willkommen," "Married," "Money, Money" and "Maybe This Time."