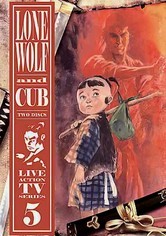 1973 NR 2 discs
With his young son, Daigoro, in tow, disgraced Shogun executioner Ogami Itto (Kinnosuke Nakamura) brandishes his Dotanuki battle sword across the Japanese countryside in a quest for revenge against the Yagyu clan, who dishonored his name and murdered his wife. Produced by famed Japanese star Shintaro Katsu, the classic early-1970s martial-arts series is based on the manga by Kazuo Koike and Goseki Kojima.