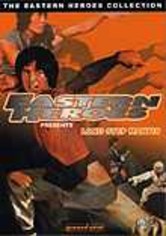 1982 NR 1h 29m DVD
Martial arts whiz Lung Fei is an amputee with just one arm, but he's scrappy nonetheless. And he's looking for a legendary book on the "mantis technique," which holds such secrets as how to kill a man with just a few quick blows. Before long, Fei is tracked down by the Mantis Master (Mark Long), who'll stop at nothing to quash -- permanently -- the troublesome upstart.