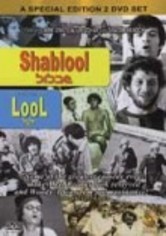 1988 NR 2h 41m DVD
Popular Israeli composers and entertainers Arik Einstein and Shalom Hanoch collaborated on this four-part television series, which captures the culture and essence of Israel during simpler, more carefree times. The series offered a mix of whacky sketches and musical numbers and was much loved by Israelis during its brief run. Along with Einstein and Hammock, the show features Dori Ben-Ze'ev, Uri Gross, Moshe Ish-Kassit and Talia Shapira.