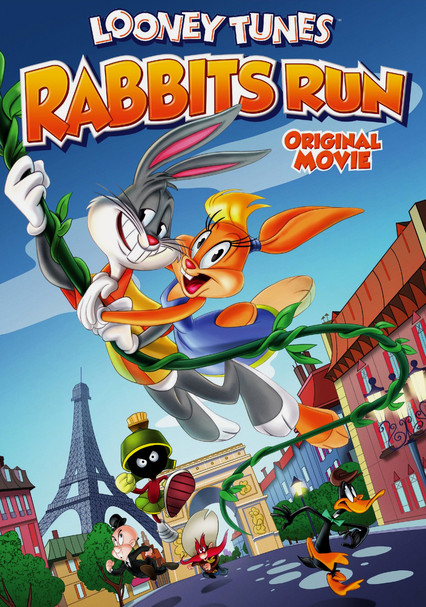 2016 NR 1h 12m DVD
When New York cabbie, Bugs Bunny, picks up the beautiful but bumbling perfume salesgirl, Lola Bunny, he has no idea that he's about to go on the longest ride of his life! For unbeknownst to Bugs, Lola, in an attempt to create the next, big scent, has inadvertently created an invisibility spray, and now the whole world is on their tails!

Parents need to know that Looney Tunes: Rabbit Run is a full-length, animated feature made by the team that produced The Looney Tunes Show for television in 2011 to 2014. With only one story, as opposed to the many episodic Bugs Bunny compilation DVDs that are out there, this movie finds Bugs engaged in an adventure with Lola Bunny, a female character first introduced in 1996's Space Jam. The characters, including a profusion of other Looney Tunes long-lived creations -- Foghorn Leghorn, Daffy Duck, Marvin the Martian, Elmer Fudd, and more -- battle each other all the way to Paris in hopes of taking ownership of a single flower's essence, with much at stake. Plenty of cartoon action sees the characters getting squashed, falling from great heights, being fired upon with an array of blasting weapons, brawling, and even jumping out of a plane. It's all comic in nature with no casualties. For kids who understand real vs. pretend violence, it's simply cartoon mayhem as usual. Humor is an important part of this tale; even the bad guys are funny and exhibit their special quirkiness. Die-hard Looney Tunes fans, accustomed to the wit and wisdom, inventive animation, and satire found in the earlier Warner Bros. cartoons by Chuck Jones, Friz Freleng, and others may be disappointed, but this film still should entertain today's kids, especially those familiar with the latest TV program.

Believe in yourself. Determination gets the job done.

Part of the Warner Bros./Looney Tunes franchise, which include related games, toys, books, movies, TV, and numerous other products.