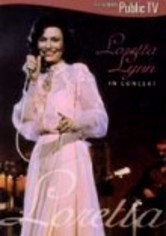 1978 NR 1h 0m DVD
In 2004, Loretta Lynn underwent a critical reappraisal after producing an album with hip young guitar slinger Jack White (from The White Stripes). In the same year, this concert from the 1970s was re-released, offering a glimpse of Lynn's talents as a young up-and-coming country singer. Sixteen tracks are performed, including heartbreaking epics such as "I Fall to Pieces," "Let Your Love Flow," "Coal Miner's Daughter" and many others.