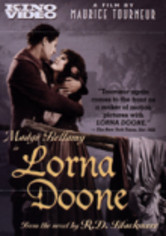 1922 NR 1h 27m DVD
Based on R.D. Blackmore's haunting tale, this silent-film classic stars Madge Bellamy as the titular heroine, a woman of nobility who's abducted from her rarefied existence and reared by people of simpler means. She grows up removed from her real family, until she meets John Ridd (John Bowers), a gentleman who's elicited the wrath of one of her kin. Soon, she finds herself face to face with her family, who, it turns out, aren't what they seem.