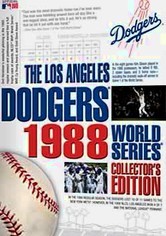 2008 NR 7 discs
Relive the L.A. Dodgers' thrilling 1988 championship run with this inside look at the team and its biggest playoff games. Underdogs heading into the post-season, the Dodgers relied on strong pitching and balanced power to defeat the Oakland A's. Watch as injured slugger Kirk Gibson makes baseball history by hitting a game-winning home run against pitcher Dennis Eckersley in Game 1 of the World Series.