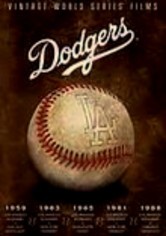 1959 NR 2 discs
Relive the Los Angeles Dodgers' five World Series championships in 1959, 1963, 1965, 1981 and 1988 with this celebratory reel of game clips and footage, courtesy of Major League Baseball cameras that captured it all. Highlights include shots of record-setting crowds at the Los Angeles Memorial Coliseum; Sandy Koufax's strikeouts of a record 15 batters; and Tommy Lasorda's unwavering optimism in the 1980s.