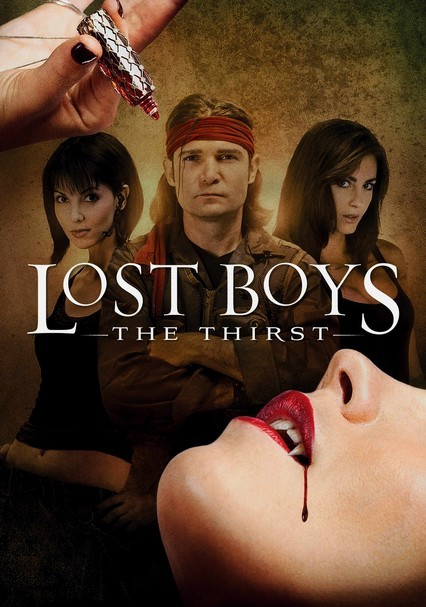 2010 R 1h 21m Blu-ray / DVD
In this second-generation Lost Boys sequel, Corey Feldman and Jamison Newlander reprise their roles as vampire-hunting brothers Edgar and Alan Frog, who agree to help an author (Tanit Phoenix) who pens vampire novels find her missing brother. Turns out he's been sucked into a dangerous world of underground raves, where a mysterious DJ (Seb Castang) reigns over a dance floor teeming with the undead.

Parents need to know that LOST BOYS: THE THIRST -- the third in the series of vampire movies that began with The Lost Boys (1987) -- features the expected amount of vampire violence and gore (biting, spurting blood, stabbing, ripping flesh, burning, and exploding bodies). Language is not constant but includes several uses of "f--k" and "s--t." There are several brief scenes of female nudity (mostly topless women dancing at a rave party) and some girl-on-girl kissing and licking. Teens take a fictitious drug called "the thirst." They are shown to be having a good time, though there is a price to pay. Parents who grew up with the original movie -- and older teen vampire fans who want something a little lighter and sillier than the Twilight movies -- may be interested.

Hardly any sex here, but there is a generous portion of female nudity. We mostly see topless women dancing at parties. In one shot, a male vampire sucks blood from the neck of a topless female. Occasionally two women are seen kissing, and in one scene, a vampire woman licks blood from the stomach of another woman. The lead female character undresses down to her underwear.

Typical "vampire violence," including biting, spurting blood, stabbing, burning with holy water, and vampires exploding into clouds of dust. Additionally, there are lots of fictitious weapons designed to kill vampires, including holy water squirt guns, ultraviolet light guns, and explosive charges that release spikes. There's also some fist fighting and sword fighting, and a vampire rips a human's heart out of his chest. A character works on a taxidermy project, and we see animal intestines and dripping blood on fur. Finally, the opening credits feature spattering blood on every title card.

Language is not constant, but is strong. There are about a half-dozen uses of "f--k" and perhaps ten or so uses of "s--t." Additional language includes uses of "hell," "damn," "bitch," and "butt."

Nobody really learns anything here; the movie more or less celebrates Edgar Frog's lifelong, single-minded dedication to killing vampires, even at the expense of a normal life. He has a fairly bad attitude toward just about everything, but hardly anything changes over the course of his adventure. His cynicism is what manages to save the day.

The hero uses a Kindle in one scene and mentions it in a line of dialogue.

Teens are seen taking drugs at rave parties. Although the drugs are fictional (it's called "The Thirst," and is really a vial of vampire blood), the movie still celebrates teens using drugs to have a good time. (Although there is a clear price for taking the drug.) The hero is seen smoking pot in one scene, and wears a t-shirt with what appears to be pot leaves on the front.