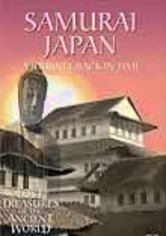 2000 NR 0h 50m DVD
Rich in history and tradition, Japan's grand monuments, shrines and pagodas trace 1,000-plus years of the country's vibrant culture, a culture largely steeped in Buddhism. But standing in contrast to the ancient belief system were the samurai warriors, who lived by a different code. Through 3-D graphics and state-of-the-art computer animation, this fascinating program invites viewers to travel back in time to explore life during a bygone era.