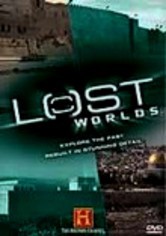 2006 NR 4 discs
From the eerie haunts of the real Dracula to Knights of Templar strongholds and Atlantis, this 13-episode series delves into the history of lost worlds. State-of-the-art computer reconstructions, excavation evidence and scientific data reveal myths and facts on Ancient Athens, Palenque and other lost locales. Join a team of history detectives as they uncover the secrets of Jerusalem, Hitler's Supercity, Braveheart's Scotland and more.

Parents need to know that this documentary-style educational series has some battle dramatizations, including some minor bloody scenes. Stories of death and injury are common, though not dwelt upon. Experts try, and often succeed, at making history appealing to a broad range of viewers.

Brief depictions of war, with some blood. Discussion of violent historical events, like the Holocaust.

Potential for mentioning/depicting drinking, though only in a historical context.