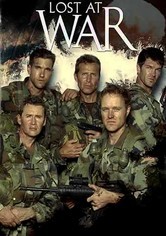 2007 NR 1h 33m DVD
In this eerie sci-fi yarn, five soldiers face a new kind of enemy when they pass through a mysterious bamboo tunnel and end up alone in a deserted base camp, surrounded by strange forces that wait and watch but don't attack. As the men begin to wonder where they are and whether they're already dead, they gradually start to disappear. Soon, only Capt. Jason Briggs (Ted Prior) remains -- but he refuses to accept his seemingly apparent fate.